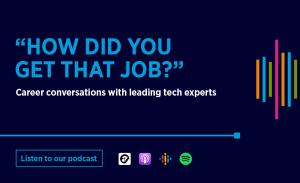 TECHNOLOGY
How did you get that job?

TECHNOLOGY
RPA 2.0: What’s Next for Automation?